A Visual Anthropologist at Distribute 2020 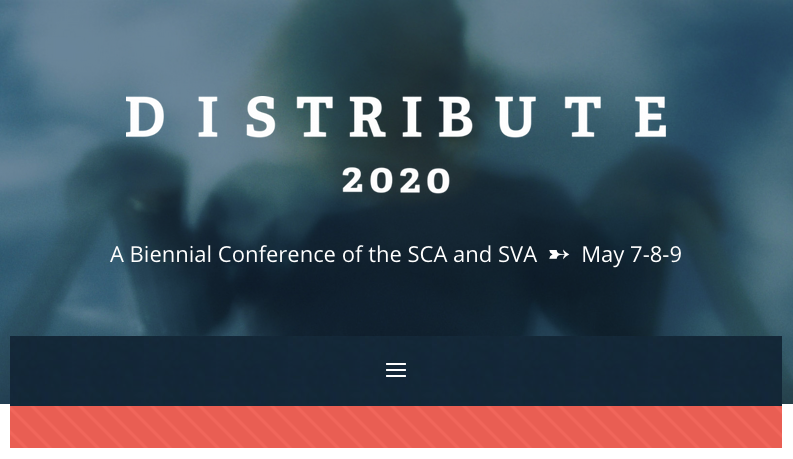 I have participated in the Distribute 2020 conference as a member of the organizing committee for the Greek node and as the creator of the video for the panel “Performances of Public Anthropology” organized by the anthropologists Alexandra Siotou and Alexandros Papageorgiou.

Distribute 2020 is an exemplar international virtual conference, organized for the second time by the Cultural Anthropology journal and the Society for Visual Anthropology. The organizers’ main goal was a highly accessible, low-cost, carbon-neutral conference that would challenge the dominant mega-conference model and offer a new alternative to academic conferencing in general.

The event took place between May 7-9th 2020 on the dedicated website https://distribute.utoronto.ca/ and the program was constituted of 29 panels with 120 panellists/panel organizers and 21 ethnographic films from approximately 30 film directors. The initial idea of the conference was a hybrid combination of virtual conferencing and in-person nodes in different cities around the globe, based on the first edition of this conference (Displacements 2018). However, due to COVID19 restrictions, the conference was adapted to the new situation and took place exclusively online. The attendance was highly international. For example, the conference team announced that 939 active participants and 1,471 unique visitors have visited the website with participants hailed from 558 cities across 78 countries!

Some of the key features of the Distribute website were the sections of the Directory, La Plaza, and Program. La Plaza and Directory were a kind of an integrated platform inside the website with a social media logic. The conference participants used La Plaza to interact and deposit materials for other conference registrants, similar to the newsfeed of Facebook / Twitter, and the Directory page to find other participants and befriend them or follow them.

Also, in the Program section, the users could find subpages with the panels separated by day and the subpage to the Virtual Ethnographic Film Festival curated by Fiona P. McDonald and Harjant S. Gill. The visitors could find the list of films separated into themes and with suggested films marked as highlights. Once a user clicked on a film, a dedicated subpage would open in a new tab where one could watch the film, and read the details and synopsis. Interestingly, the organizers added the possibility to follow or comment on the films.

The option of asynchronous online commenting on the film offered a new layer of communication between the directors and the audience in this online realm. It provided the space to generate discussions and commentary on the films that are often not feasible for directors in physical cinema theatres. Often directors cannot attend such events for various reasons (environmental, personal, financial reasons, etc.), and even if they do there is usually a strict time-limitation for the audiences’ comments and questions.

However, watching a film alone in front of your computer is an entirely different experience from the one in the cinema theatres where you share the space and experience with other viewers, and the live discussions, reactions, and meta-discussions are potentially limitless among viewers – directors – organizers and viewers again.

Online film festivals need to cover much ground in order to be digitally performed in a manner that would socially make sense and one that wouldn’t just feel like a youtube watch. Things like the random conversations during the film with strangers, or sleeping/dreaming viewers during a screening, the audiences applauding, laughing, crying or the possibility to approach directors for a possible insightful discussion after a film are a few of the things that actually made me feel that I miss the lively experience of watching a festival in a movie theatre.

Another thing that struck me during Distribute 2020 was that this conference was an excellent opportunity to observe the audiovisual perceptions of academics, particularly anthropologists, and how essential it may be for academics to familiarize themselves with audiovisual and multimodal methods and approaches in research and (online) dissemination.

From the outset, the organising committee was encouraging panellists to go multimodal and to experiment with both the form and the content for their video panels. However, the organisers were aware that many panellists and panel organizers may not have undertaken this kind of work, of combining image, sound, and text in a presentation before. Therefore, they offered an array of ‘How-To’ videos along with a series of short tutorials designed to support panellists to imagine and create multimodal presentations.

Unfortunately, despite the “How to Videos” and the support of the organizers, the majority of the video panels was just “copying” the presentation form of non-virtual events. The presentations were based on powerpoints, video recordings of people just talking or reading in front of the camera, videos with a selection of photos/charts/videos with a linear didactic voice-over, or a combination of all the above. Most of the videos, in my view, were visually, sonically, and multimodally poor, with a few significant exemptions, such as: “Echoes and Edges: Sonic Forms for Distributed Listening” organised by Megan Gette and Marina Peterson, and the keynote “Miyarrka Media: Making Worlds Otherwise” organised by the Distribute 2020 team, which pushed the boundaries of new multimodal ways of creating presentations in the context of virtual conferencing.

As a visual anthropologist, I found it very interesting to observe such difficulties of adaptation and expression in an audiovisual mode of presentation. I realized that, for most of the participants in the academic world, despite the rising significance (and prominence) of images in social communication, the medium of text remains the dominant one. Certainly, this could be considered normal as long as linearity in written language serves academia in order to make definite statements, to go from point A to point B, and to put things in boxes. Nevertheless, this may be an(other) occasion to reflect on to what extent everyday life is linear and straightforward, and even more, on how linear the digital aspects of our lives are.

In 2020, when anthropologists are surrounded by images, sounds, smartphones, social media and online conferences, the need for a shift to an anthropological multimodal turn is more apparent than ever. Conferences may gain new qualities, such as being online, highly accessible and more environmentally-friendly; but to do this we first have to think outside of the standardised academic boxes.

We could get inspired by the very example of the history of cinema. Cinema, since its birth, and for several decades, has been performed along the lines of the dominant modes of theatrical acting and direction. For decades, directors and actors were imitating dramaturgical performances, without considering the new possibilities offered by cinema, cameras, and montage. Bresson, Vertov, and Astruc were a few of the people who realized the power of the cinematic language and made use of its potential power of expression. Let’s try to be like them the next time we try to create a video presentation for an online conference. Let’s question ourselves, on how we may combine text, sound and image, as well as linear and non-linear narratives, and on how we may construct presentations in novel and engaging ways.

Distribute 2020 conference was a great initiative that opened up new possibilities on how conferences (and film festivals) could function as scholarly and social practices, promoting knowledge as (and within) a rhizomatic network of exchange. You can visit their website here for the next two years: Distribute 2020